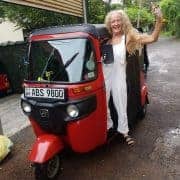 I had booked my Tuk Tuk rental for 30 days – the whole month of September, 2019. I booked the 30 days after my ten day Vipassana at Anuradhapura. So I was feeling very chilled out.
I was very excited about the adventure – something the locals could not understand. A fews of the ladies from the Vipassana thought the idea was hilarious though, and want to come on my next Tuk Tuk adventure (if I do it again). A few others that I worked with on Dharma Service over the following four days were very worried about me and my safety – especially on the elephant road… Because Tuk Tuks are seen as a poor man’s transport, they couldn’t understand why I would not just hire a car… After I explained that we don’t have Tuk Tuk’s in Australia and that it is fun form me – they kinda understood, but still think its hilarious.

I was booked to collect the Tuk Tuk, have my orientation and driving lesson from 9am on Sunday 1st. I arrived on time and was greeted by Sherry and the company owner Tom & his lovely wife and little boy, River. Tom is a lovely young dude from Brisbane. They really have everything sorted – everything you need is done and communicated perfectly. The fact that the company is highly ethical and supporting locals is a deal clincher. I instantly felt much better about the whole thing as my new Vipassana friend’s advise was a bit of a concern.

My driving lesson around the streets of Columbo was interesting and fun. Im glad it was sunday, so not too bad at all. A huge Monitor Lizard casually walked in front of the Tuk Tuk. After admiring him for a minute or two, I drove around him. Then the rains came down. The Instructor asked if I wanted to stop and I said no – lets continue as I’m sure I will be driving in the rain at some stage on the road trip. So we drove around for forty minutes or so before going back to the office for the sign off.

I passed the test – Yay!

So I was off on the road to my first stop, Bentota. The road was just straight through so no problem at all. I didn’t stall it once, so I was pretty happy about that. The open road was very cruise but coming in to towns and villages gets a little intense… A couple of hours later, I reached my destination – The Little Swan Guest House, Bentota in one piece.

Well! That was fun…