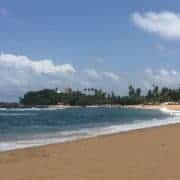 I decided to head off after visiting the temple with the tallest Buddha. I met a lovely family at the temple who enjoyed practicing their English with me. The drive down was pretty good today. I did come across a very nice seaside town – Hikkaduwa. Ill stop there on the next trip. As it turns out, Unawatuna is just as nice.

I ended up getting lost looking for my Guest House. An old man in the narrow street helped me out so I stayed at his friends place down the raod as it was now on dusk. After a freshen up he called a tuk Tuk for me to take me to a vego restaurant. I came in to Jina’s Vegan Restaurant. Jina is a Chef, an ordained Buddhist Monk and Meditation Teacher. The restaurant is part of Zimmer Rest, a 12 room guest house/hotel place. Jina invited me to meditation at 7am. I booked in to stay two nights with him. After meditation, I did a yoga class with Ranga. Unfortunately Ranga has a back injury but Ana came along to teach. Ana is a young Russian girl. We did yoga for an hour then talked for an hour. She is going up to Anuradahpura this month for her 10 day Vipassana so we had lots to chat about. 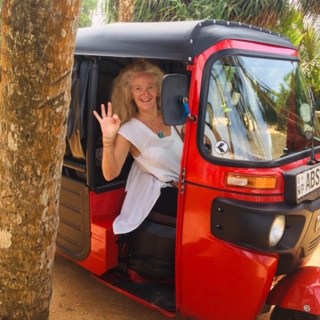